Posted on October 21, 2019 by Littlehampton United 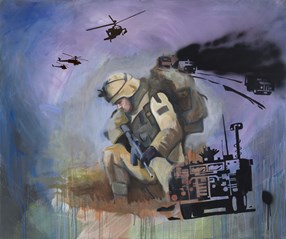 The Core Values illustrated by the art are: courage, discipline, respect for others, integrity, loyalty, and selfless commitment. Army chaplains will be encouraged to use the art to reflect with soldiers on the meaning of these values and how each one applies to them. Questions that might be prompted from the artwork include: What helps you to find the courage to overcome fear? What inspires you to put the needs of others above your own?

Speaking on the background to the project, Doug Swanney, Chair of the Methodist Forces Board, said:

“This resource was prompted by a Methodist army chaplain who saw the potential for art to help chaplains in drawing out soldiers’ experiences and understanding of the British Army’s Core Values.

A talented Methodist minister spent time listening to soldiers’ stories of how the Core Values are lived out in their work and lives. Inspired by these stories, he used his God-given gifts to create the artwork.” 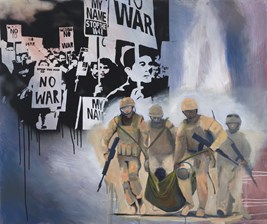 The collection has been named ‘The Watkins Collection’ after the Revd Owen Spencer Watkins, the first Methodist Army Chaplain to serve in the field and who was instrumental in the formation of the Royal Army Chaplains’ Department.

The Reverend Chrissie Howe, Secretary of the Methodist Forces Board, said:

“It might surprise a few people to learn that the Methodist Church has commissioned artwork on the British Army’s Core Values. Yet it makes perfect sense as our army chaplains regularly teach ‘Values and Standards’ to soldiers. We are delighted with Ric’s work as the images are perfect discussion starters – both poignant and dynamic.

Alongside sending chaplains, this artwork is another way that the Methodist Church demonstrates its commitment to those who serve in Her Majesty’s armed forces.”