Posted on April 4, 2019 by Littlehampton United 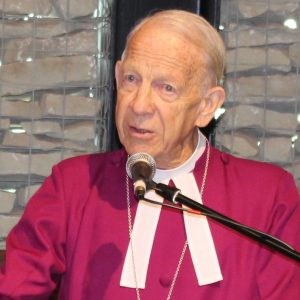 It is with sadness that the Methodist Church announces the death of the Revd Prof W Peter Stephens who died on Monday 1 April 2019. He was a Past President of the Methodist Conference 1998/1999.

The Revd Prof W Peter Stephens was born in Penzance in 1934 and was educated at Truro School, Clare College and Wesley House, Cambridge.

From 1995 he was President of the Society for Reformation Studies and in 1997 he won the Max Geilinger Prize for The Theology of Huldrych Zwingli (OUP, 1986).

From 2003 to 2004 he was Chair and General Superintendent of the Methodist Church, The Gambia and from 2010 to 2012 he served as the Presiding Bishop.

He was a linguist who travelled and preached in many countries and was closely involved in the Conference of European Churches and on World Methodist Church commissions.

The funeral for the Revd Prof W Peter Stephens is taking place on Wednesday 17 April.  There will be a service for his family, at 1pm in Camborne, and then at Penzance Methodist Church at 2.30pm.  The President and Vice-President will be attending.