Posted on March 17, 2021 by Littlehampton United 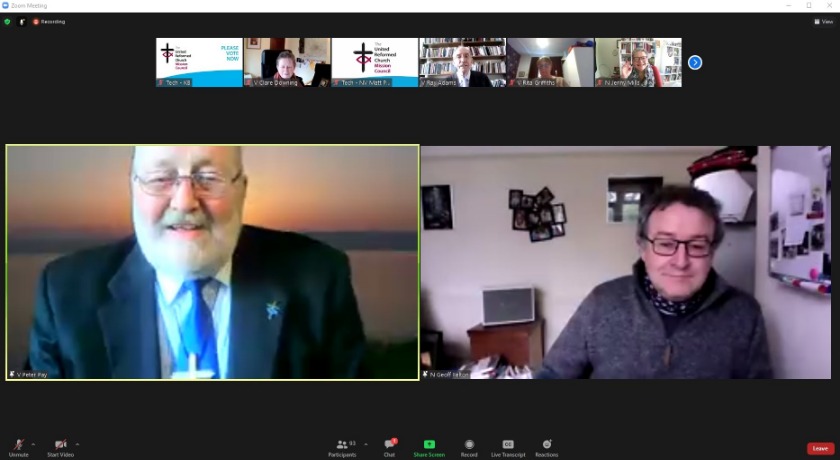 Day three of Mission Council opened on 17 March with worship led by the Revd Helen Everard, Chaplain to the Moderators of the United Reformed Church General Assembly.

Major events planned for this summer have been cancelled or postponed, including the RHS Chelsea Flower Show, Glastonbury and the Royal Welsh Agricultural Show. The General Assembly of the Church of Scotland is taking place virtually this year.

Coronavirus vaccines are being rolled out at speed but we should not expect that the vaccination programme will be completed by early July. There might also be further outbreaks of the virus.

The UK Prime Minister’s roadmap for easing lockdown in England means a decision confirming gatherings such as General Assembly can take place will not be made until later this year and so too late for the July meeting.

The booking with the Christian Conference Trust (CCT), owners of The Hayes, for July 2021 has been cancelled and all monies paid for 2021 will go to the 2022 booking, the same for the Travelodge booking for overflow accommodation. The cancellations mean no financial cost to the United Reformed Church.

The virtual meeting of General Assembly over the same long weekend in July (9-12) using Zoom will build on the experience which has been gained from hosting three virtual meetings of Mission Council.

URC Youth and the Head of Children’s and Youth Work are considering options for a gathering for What Do You Think, and the Clerk and Head of Communications are exploring digital mechanisms for electing a Moderator of General Assembly. 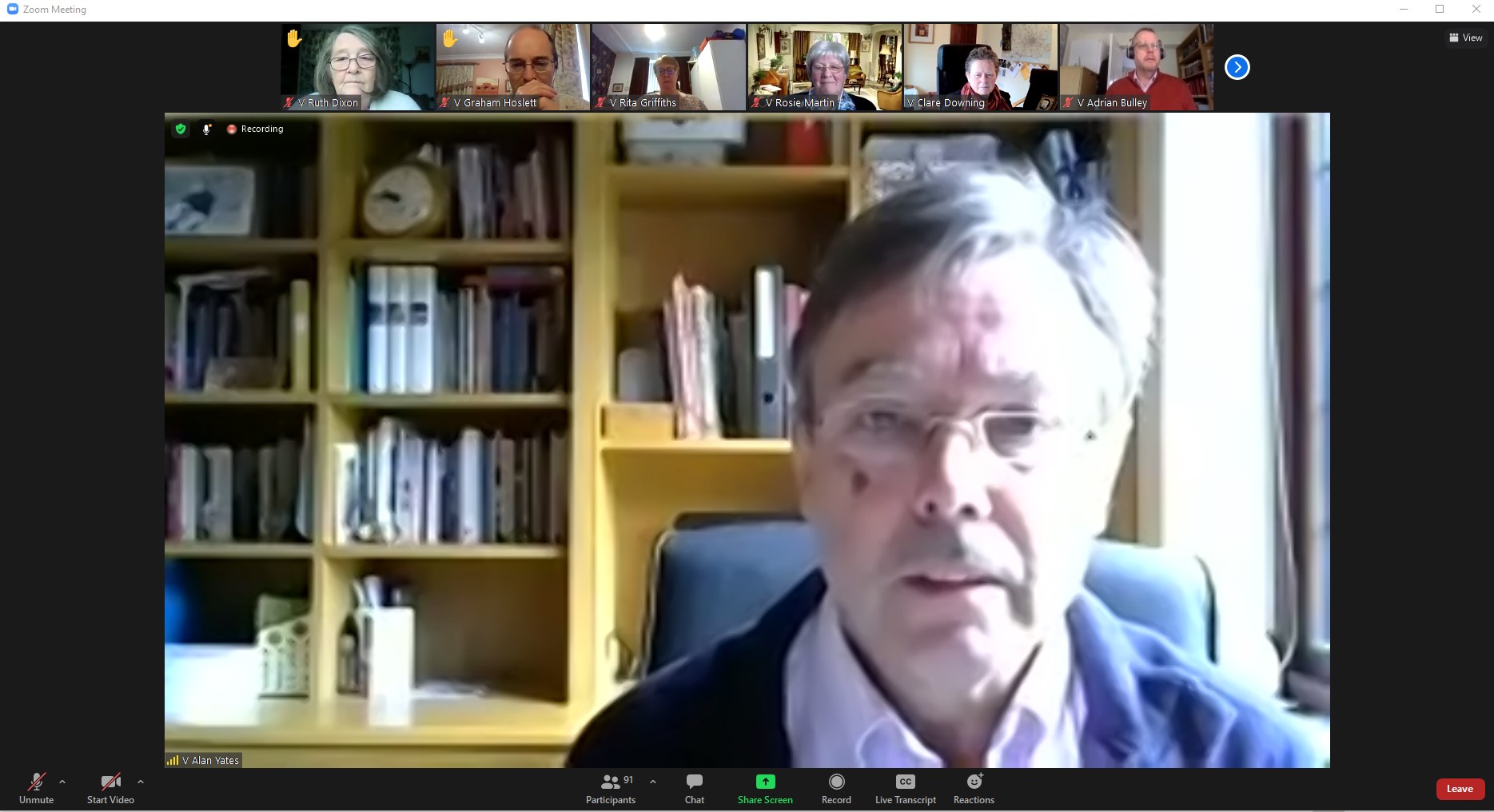 “The aim is to deplete the fund in a decade,” said Education and Learning Convenor Alan Yates, “as well as to share achievements and lessons learned.”

The strategy document was too long and unwieldy for many to easily understand, the paper said, or to use. As such, a more integrated approach was offered.

Since 2016, much has been offered by local churches – audio, video, printed word – with efforts to engage, encourage, support and love local communities. No longer can ‘what we have always done’ be accepted as there was a need to step up and step out into the new reality which is emerging.

“We want to empower and inspire faithful, missional people who can dream dreams and see visions and join in with the amazing things that God is already doing in the world,” the report said. “We want to resource, encourage, and enable people who want to share the abundant and life-giving love of God with the communities they encounter.”

Alan Yates responded to several questions and comments, some of which mentioned richer synods considering not applying to the fund.

Jenny Mills, Secretary for Education & Learning, said the committee was working hard on how the money being spent is changed to development of people and not processes.

Alan Yates confirmed that £200 can be given as an annual award and added that it was trying not to limit the creativity about the use of the money. For example, the funds have to be used at URC events but that doesn’t exclude others from taking part.

Steve Faber, Moderator of West Midlands Synod, said that the Windermere Centre was available for the whole of the URC and so this fund should be available to all. 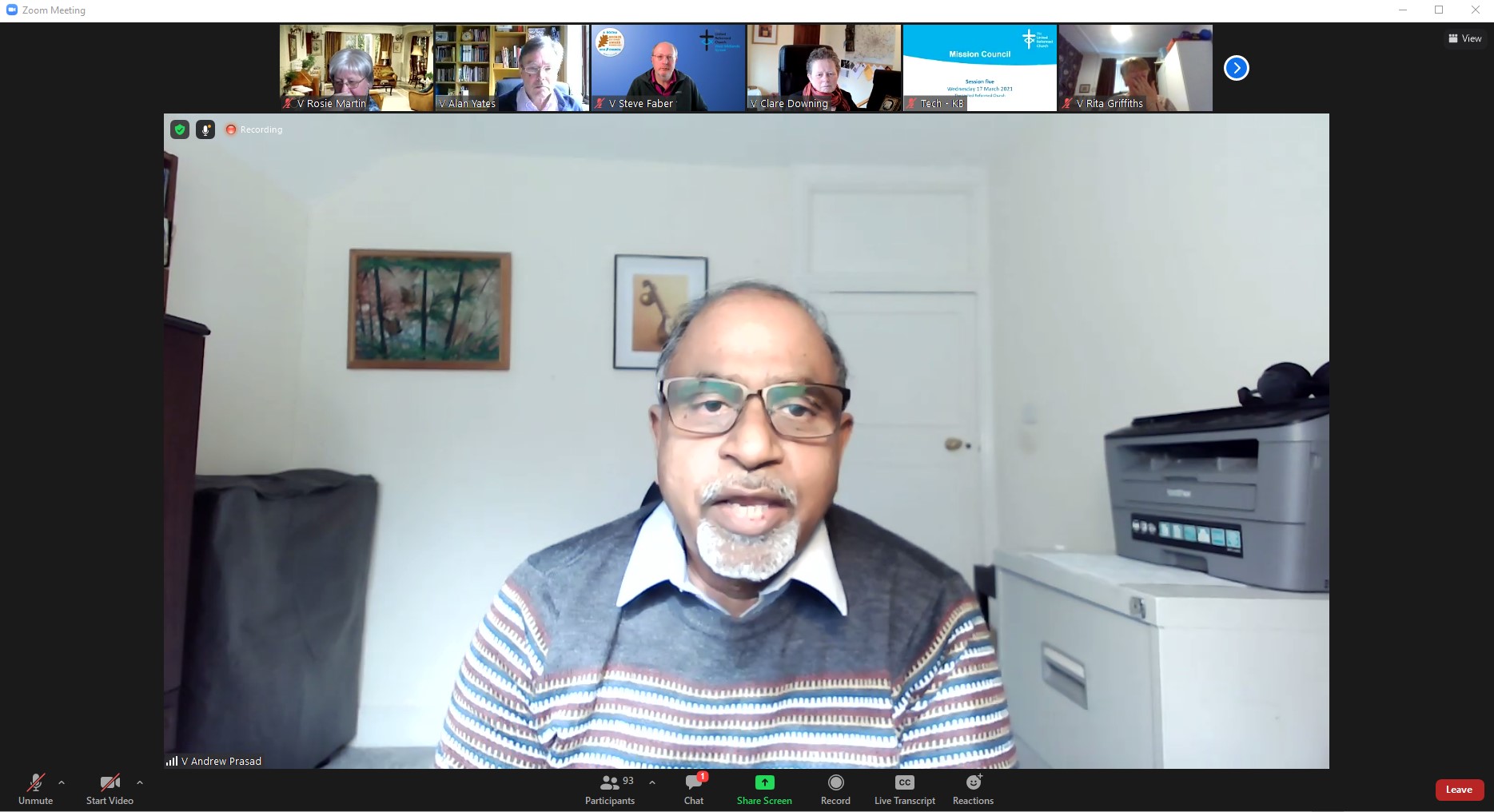 Andrew Prasad, Moderator of Thames North Synod, said that too often we ask richer synods to do things, which in turn encourages them to have a life of their own. They should stand in the queue in the same way we that all do, he added. Those Synods can always contribute more to central funding pf the Church if they choose, and therefore should be treated equally.

In the coming months, clarity will be added to the ‘how’, ‘who’ and ‘when’ of the strategy so that the Committee can be held accountable for its focus on missional discipleship. Further promotion about the existence of the fund will also be made.

Paper J3: Supplementary Nominations – Report 2
The Revd Ray Adams, advised Mission Council that the Revd Geoffrey Felton has been appointed to serve the Mersey Synod as its Moderator. A started date of 1 August had been agreed between the Synod and the Revd Dr John Bradbury, General Secretary of the URC. This nomination was accepted by Mission Council and Geoffrey was congratulated by Peter Pay, General Assembly Moderator who was chairing the session. In turn, Geoff thanked Mission Council and said that he was looking forward to the serving the Church, the synod, and the area in his new role.

Church leaders statement on Statement from Church leaders on the UK government announcement on warhead numbers
The Revd Clare Downing, advised Mission Council that Francis Brienen, Deputy General Secretary (Mission), would speak on the government’s recent review of its defence, security and foreign policy to increase the number of nuclear warheads the UK has.

Francis said that the government’s decision is clearly a hugely retrograde step, and completely at odds with the painstaking work that the URC and many other Churches have been supporting for many years in moving towards non-proliferation of nuclear weapons. Most recently this has been an interfaith statement and video that our Assembly Moderators were part of when the UN Treaty on the Prohibition of Nuclear Weapons passed into law in January, and by General Assembly Resolutions in 2016.

Francis advised that Churches had taken swift action in reaction to the announcement of the government’s decision by issuing a statement which had been coordinated by the Joint Public Issues Team. Clare has signed the statement on behalf of the URC. The statement can be read here.

Paper I4: Walking the Way
Francis then presented an overview of Walking the Way. Feedback from a number of groups and individuals has been sought recently and funding is assured until the end of this year. 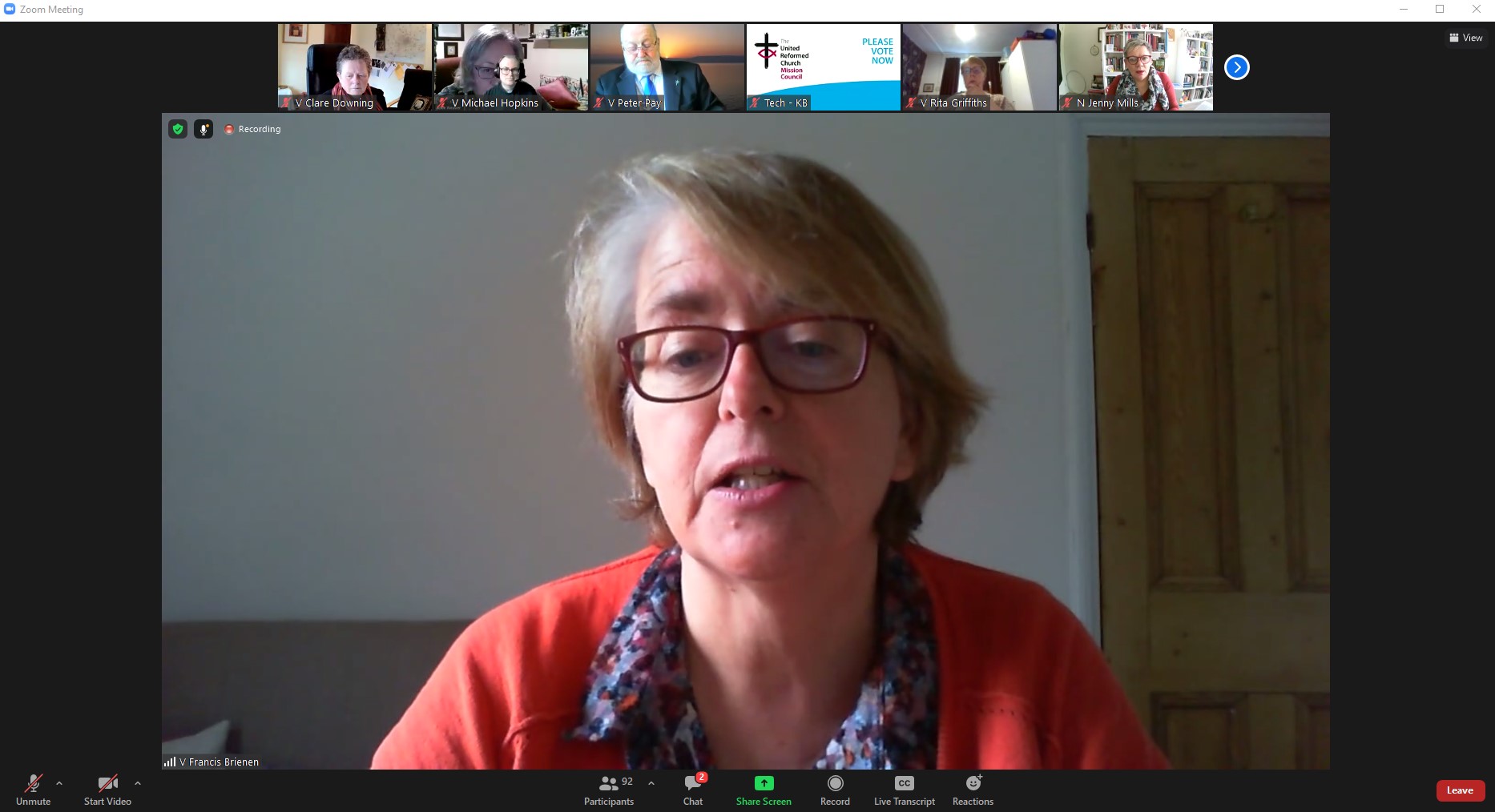 1. A future focus on collaborative working, rather than something focused or directed by the steering group

2. A focus on asking every URC committee to include Walking the Way on its agenda

3. Enabling/encouraging/equipping others to keep discipleship at the heart of what they’re developing

4. Produce only very specific things under the Walking the Way banner

Discussion from the floor included praise for Walking the Way’s Project Leader, Simon Peter, who was called an “absolute delight” to work with by the Revd Jenny Mills, Secretary for Education & Learning. Jenny said: “He sees connections where many of us don’t. He’s so keen for everybody to be involved and I would like to commend how easy it is to work with him.” Other queries included how a series of online events, produced by Walking the Way would be publicised. Francis clarified that the events and other activities would be publicised through Walking the Way’s e-newsletter, social media channels, and other channels.

Reuben Watt, URC Youth Assembly Moderator, highlighted and commended the Lent activity packs produced with the help of Children’s and Youth Work, how practical the packs were and how all households can get involved with them. 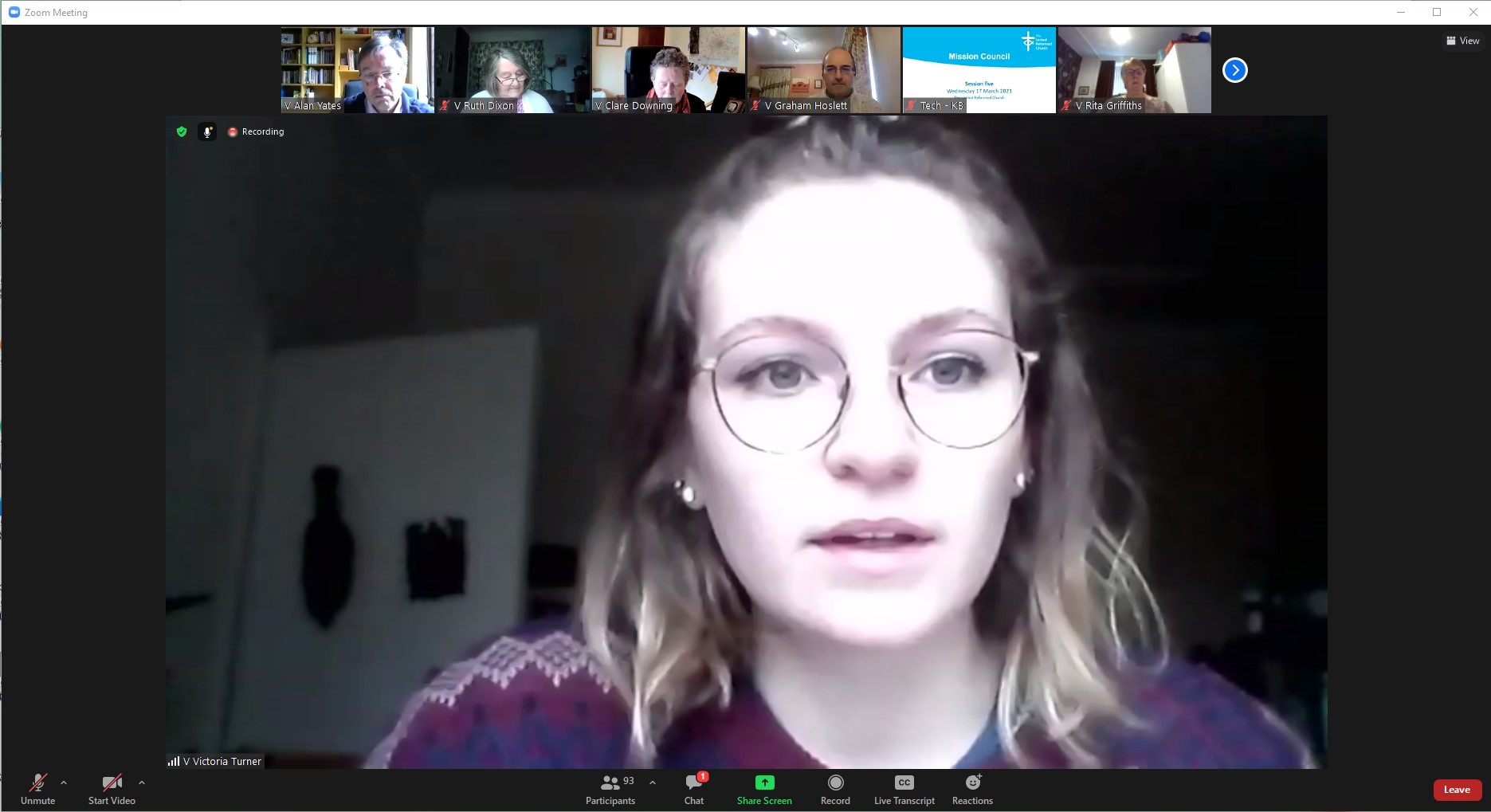 Victoria Turner, a member of URC Youth, queried what the original aim for Walking the Way was when the Council for World Mission grant had been applied for, and whether that aim had been reached?

Francis clarified that the original aim for Walking the Way was very much the whole idea of change of ethos and culture in that all that the URC does with a focus on missional discipleship. This focus is a long-term aim though which some concrete goals have been achieved. Although the overall long-term aim has not.

Simon is undertaking an ongoing evaluation of Walking the way, but, Francis added, there are some parts that are difficult to measure as we are talking about change of ethos and culture. Certain things are measurable ie the take up of resources and feedback from people. However, she continued this illustrated the importance of sticking with Walking the Way because of the long-term aim.

Session six
Mission Council closed with worship, led by the Revd Helen Everard and a Bible study by Peter Pay.