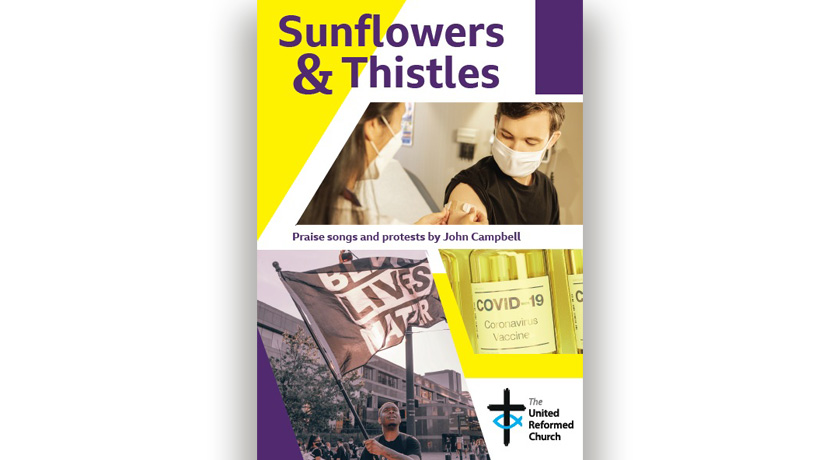 As the first anniversary of the murder of George Floyd approaches, the United Reformed Church (URC) has published a new collection of praise songs and protest, Sunflowers & Thistles.

Written by the Revd John Campbell, Minister of High Cross URC, Tottenham, the book of 36 songs was inspired by the global Black Lives Matters (BLM) protests and devastating impact of Covid 19.

Available to download for free from www.urc.org.uk/sunflowers-and-thistles, John explains how it became important for him to express the emotions of his congregation:

“My congregation is 95% black. I sit alongside the black experience all the time. During the height of BLM, there was a protest outside Tottenham Police Station, which I walk past every day. Someone had left a bouquet of sunflowers and thistles. It was unusual. It was hand-made, but I found myself thinking about how the sunflowers could stand for the creative spirit of black people, how underappreciated that spirit is, and how the thistles represented the struggle to ensure that Black Lives Matter.

“When George Floyd was murdered I, like many, was angered. Public demonstrations across the world showed clearly how this death struck a chord, even though many people have been killed at the hands of police in the States over the years.

“At church singing is a way of expressing our lament and joy and the pandemic stopped us from being able to do that. You’d have one person singing on Zoom. For me, this cause of our silencing and separation demanded new songs.”

John has been writing songs for his local church for the past 25 years. In 2016, he wrote Songs to shake us up, a collection of 200 songs, he described his songs as “intentionally specific, contextual, immediate and ephemeral”. That description still applies. For example, at points he borrows the language of BLM. In the song ‘The engines of ambition’ John writes “all heaven will take the knee”. In ‘We’re facing a danger’, about the Covid-19 crisis, John writes:

our gestures of kindness, of intimate care,

“I wrote Sunflowers and thistles hymn by hymn throughout 2020,” he continues. “It was emotionally difficult to write, especially the first one about George Floyd. That was very difficult because emotions were very strong at the time. I struggled to do the emotions justice. Each hymn took about two to three hours to write. I do have a favourite, but it varies because of what you’re facing at the time. It’s a bit like choosing between your children.”

The minister of 40 years was due to retire at the start of the pandemic in April 2020, but says it felt wrong with so much going on. He now plans to retire in September.

“I hope to keep writing songs in my retirement,” he continues. “I write hymns for a particular time and it seems that I am able to put into words for singing what some people want to say. It always surprises me that people appreciate them. I see these songs as my attempts to say what we as a congregation might want to say and sing in response to our world – not the words that I think, but what we think.”

Visit www.urc.org.uk/sunflowers-and-thistles to download the PDF of the song booklet, to download the music versions of the songs, and for PowerPoint of selected songs for use in worship. Further resources and videos will be added in the coming weeks.