Posted on November 24, 2021 by Littlehampton United

COP26 was the most significant climate summit since Paris in 2015. The measures outlined in the COP26 Glasgow Climate Pact are critical if we are to set a course to keeping global warming below 1.5 degrees.

Members of churches, in the UK and further afield, have been campaigning in advance of COP26 to ensure that topics such as paying for the loss and damage cause by climate disasters were on the agenda for the Glasgow summit. So what ultimately was achieved?  You can find a 3-page overview here but meanwhile, here are my headlines on the summit’s achievements and disappointments:

When you look at the cumulative picture, actual tangible progress is far too slow. Worryingly, it is difficult to see where the landing zone might be for negotiations over quantities of finance for mitigation and the stronger targets necessary on the part of large emitters in Asia, Africa or Central/Southern America (as well as the US). 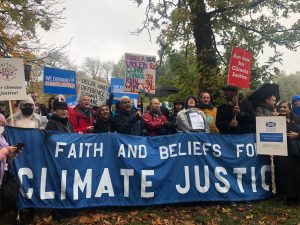 However, a sense of urgency was evident at COP26 and this was reflected in some of the outcomes. Consequently, it will be more difficult to park issues for years into the future, or to claim (as some governments are tempted to do) that there is no need for a further review of a nation’s targets for five years. Instead, all governments have been urged to review their contributions by 2022 in the light of the overall deficit.  There are now a number of new initiatives on the agenda for COP27 in Egypt next year, including the funding of compensation for loss and damage.

In summary, COP26 has put in place a whole new architecture for taking forward the Paris agreement and pledges. But, like investments, the value of negotiated agreements can go down as well as up. Willingness to collaborate is key. COP27 next year is now even more critical and there is more on the agenda than was the case just a few weeks ago.

[1] According to Climate Action Tracker https://climateactiontracker.org/global/temperatures/