The cost of a decent life

Posted on December 9, 2021 by Littlehampton United

As I write Christmas is only 21 sleeps away! I’m not too stressed about Christmas; I have already bought my train ticket home and I have had some good ideas about presents that I am going to buy members of my family. But for millions of families with low incomes, the cost of presents, Christmas food and heating the house over winter are going to be a significant expense on top of normal daily living costs. This is just when households are working to recover from the financial impacts of covid; especially for those who lost jobs or got into rent arrears and debt.

At the Joint Public Issues Team, we are beginning a piece of work to explore why so many people in the UK struggle on low incomes, and what can be done about it. A quarter of parents say that there have been times when they have struggled to feed their children, and it is predicted that by spring nearly 5.5 million households will be struggling to keep their homes warm. In the face of this widespread need, we are going to explore the challenges faced by people on low incomes, how the system needs to change, and what our Christian faith has to say about it.

Let’s start this journey by setting the scene…

There are so many different ways of measuring and talking about poverty and the experiences of those in our society who are on a low income. You might have heard some of them: ‘child poverty’, ‘severe poverty’, ‘relative poverty’ or ‘destitution’. It can be hard to compare statistics when different news outlets, government bodies and charities use different measures to talk about the situation faced by those on low incomes.

I am going to break down some of the most commonly used measures.

You might have heard news reports of the number of people living below the poverty line. Each year the UK Government publishes the Households Below Average Income (HBAI) survey which details how many people were living in their definition of relative poverty.

Relative poverty can take into account the widely varying cost of housing across the country by looking at people’s disposable incomes after housing costs. Households are considered to be below the UK poverty line if their income is 60% below the median household income after housing costs for that year. This is a measure of relative poverty as it compares incomes in the UK to each other to see how many people are falling far below the (median) average.

Historically the definition of poverty has been politically contentious, leading to the creation of the Social Metrics Commission, a cross-party body that created a new poverty metric. This is a complex measurement that takes into account housing situation, the length of time someone has been in poverty and the level of poverty experienced. In reality the figures that it produces are very similar to those for relative poverty.

Another way to look at the number of people who are in poverty is not by comparing people’s incomes but by considering whether people can afford to cover the basic necessities that they need to live. The Joseph Rowntree Foundation, after consulting with experts and members of the public, defined destitution as when someone can’t afford ‘the absolute essentials that we all need to eat, stay warm and dry and keep clean.’ Those basic essentials are ‘having a home, food, heating, lighting clothing, shoes and basic toiletries’. Households are defined as being destitute if they cannot afford two or more essentials in the month, or if their income is extremely low (less than £70 a week after housing costs for a single adult).

With the UK’s minimum wage laws, benefit system and active local and national government you might think that very few people fall below that level. However, in 2019 2.4 million people, including 550,000 children experienced destitution at some point. That was a 23% increase from 2017. Just over half of those who were destitute were disabled or had long-term health conditions.

Destitution is a helpful measure as it shows us how many people are struggling with extremely low incomes. However, many people who are not classed as destitute still struggle financially. For example, someone who (in the last month) was unable to light their home for five or more days or who has slept rough for one or more nights is not counted as destitute if their income is above the threshold.

Another way of understanding poverty is the minimum income standard. This is a measure of how much households need to have coming in to be able to afford a ‘minimum socially acceptable standard of living’. These standards are recalibrated every year by asking members of the public what is essential and researching how much that costs. The 2019 report found that a single person needs to earn £18,800 and a couple with two children each need to earn £20,600 to reach the minimum standard.

These figures are the basis of the concept of a Living Wage – a wage that is calculated according to living costs.

In 2018/19, 19.6 million people (29.9%) were living below the minimum income standard. You can see that this places the bar much higher than the relative living wage or the measure of destitution by including the cost of people participating in society and expenses like being able to run a car. 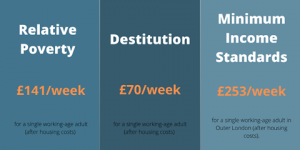 So what is the cost of a good life?

While each measure can be helpful in different ways, the minimum income standard offers a much more holistic way to understand income and poverty than other measures. However, we also recognise that people’s incomes are only one part of what makes for a just economy that enables the flourishing of all life.