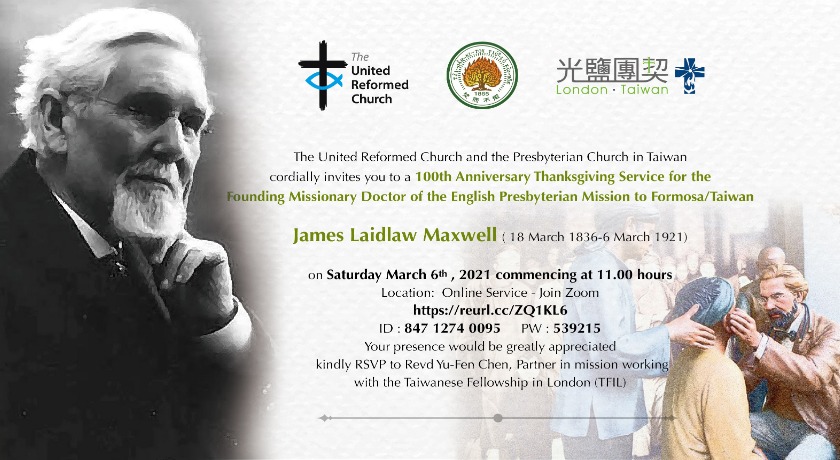 The centenary of the death of James Laidlaw Maxwell, regarded by many as the founder of the Presbyterian Church in Taiwan (PCT) denomination, will be commemorated on 6 March.

The PCT and the United Reformed Church (URC) are close international partners. To mark the event, the PCT and the URC Taiwanese Fellowship in London are holding a thanksgiving service on 6 March at 11am via Zoom.

To recognise the invaluable contribution of Dr Maxwell, the PCT is cooperating with the Tainan City Council in Taiwan to hold exhibitions, a guided tour visiting places of significance in the missionary’s work, name a park and public library after him, along with the publication of a series of postage stamps.

In the UK, in addition to the service, the PCT is carrying out a refurbishment of Dr Maxwell’s grave and a memorial plaque is being commissioned. To attend the online service please the Revd Yu-Fen Chen, PCT minister serving with the URC through the Council for World Mission’s Partner in Mission programme.

James Laidlaw Maxwell was born in Scotland in 1863. He studied medicine at the University of Edinburgh and went to work at the Brompton Hospital in London and Birmingham General Hospital. An Elder in the Broad Street Presbyterian Church, in October 1864, Dr Maxwell became the first missionary to be sent by the Presbyterian Church of England, now part of the URC, to Taiwan, then known as Formosa.

In June 1865, Dr Maxwell gave up his work in Birmingham to carry out his missionary and medical work in Taiwan, preaching as a supplement. The 16 June is remembered as the beginning of the Presbyterian Church’s missionary work in Taiwan, which subsequently led to the PCT being formed.

The Revd Yu-Fen Chen says: “With his excellent medical skills, Dr Maxwell was able to treat people and give free medicine, and he was widely accepted by the locals. Sadly, he was rejected by local Chinese doctors and Dr Maxwell was forced to leave the city of Fucheng where he was working.”

Yu-Fen continues: “Traditionally, Chinese medicine is passed down from teacher to disciple or from family to family, and there is no licensing or registration system. The quality of practice is not always high. This was the case in Dr Maxwell’s time. However, Taiwan’s official medical practice was formed nearly 20 years after Dr Maxwell started his work.”

For some years after leaving Fucheng, Dr Maxwell practiced medicine and preached the gospel in southern central Taiwan. Yu-Fen adds: “He crossed mountains and entered the Yushan and central mountain areas. He reached out to all the Pingpu tribes, and also returned to Fucheng.”

Yu-Fen continues: “During his six years in Taiwan as a pioneer in the practice of medicine and missionary work, Dr Maxwell set many ‘Taiwan firsts’.  Not only was he the first missionary sent to Taiwan by the English Presbyterian Church, but he also founded the Qiho Medical Clinic and the Fucheng Presbyterian Hospital, which later developed into the westernized Sin-Lau Hospital – firsts of their kind in Taiwan. He established chapels in Kan-Xi Street, Qiho, Bitou, Tainan Taiping, and Muzha (Inner Gate) – the first time Taiwan had seen such developments.”

Yu-Fen adds: “The people of Taiwan remember the commitment of Dr Maxwell’s family to Taiwan and remain grateful for his medical skills and passion for evangelism.”