Reflecting on the life of Archbishop Desmond Tutu

Posted on December 26, 2021 by Littlehampton United

Church leaders have reacted to the news of the death of Archbishop Desmond Tutu: 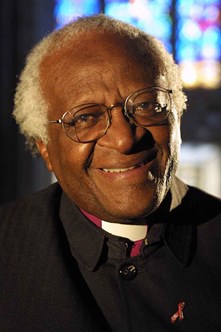 The Revd Sonia Hicks, President of the Methodist Conference, said:

“As a Black Christian, I grew up aware that the late Archbishop Desmond Tutu did not not allow the presuppositions of other people define his own self identity and self worth, even under apartheid. That awareness fuelled my desire for a more just and inclusive world for all. I pray for those mourning his loss today and hope that his work for justice in South Africa and the world over continues to burn bright.

“As the late Archbishop said:

‘There comes a point where we need to stop just pulling people out of the river.. We need to go upstream and find out why they’re falling in.'”

“It is with huge sadness that we learn of the death of Archbishop Desmond Tutu. Tutu was a man whose deep Christian devotion enabled him to see each and every human being as the expression of the image of God in all its beloved and beautiful diversity. This fired a passion for justice, truth and healing which brought him to the forefront of the leadership of national life in South Africa and on the world stage. His faith gave him the strength to do, to dare and to defy.

“Those of us who only knew him through his writings take heart from his wisdom and insight, which was both accessible and deeply challenging; people who had the good fortune of knowing him speak also of his joyful exuberance, pastoral grace and irrepressible, infectious laugh!

“My thoughts are particularly with his family at this time. He will be much missed.”

“Today I give thanks for the life of Archbishop Desmond Tutu. He was a beacon of hope and persistence in the midst of the horror of apartheid. He took a stance on LGBTQ+ rights that put him at odds with many in his church, yet he remained committed to sharing God’s inclusive love.”